We had just landed at the Gwadar Airport. We expected a plane full of passengers as we had heard many p 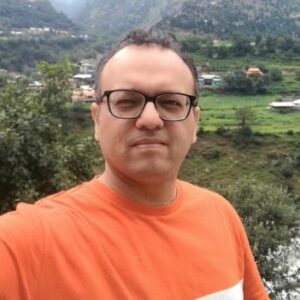 eople were visiting Gwadar for investment opportunities. The plane was only 75% full. The airport wasn’t up to the international standards, we had just found out that they were building one of the largest international airports in the region a few kilometers from the domestic airport where we had just landed. We had made reservations at the PC hotel and our pickup was on time. As we boarded the van to take us to our hotel, there was another passenger the driver told us. A tall guy with glasses had just joined us who was also staying at the same hotel. Once we exchanged pleasantries, he told us he had been investing in Gwadar since 2003-4. I felt lucky to have found a Gwadar Investor with such an experience and sought this as an opportunity to get information regarding the developments that have taken place.

After a hectic day I met the gentleman at dinner at Nadia’s and asked him if I could get an interview to be published on our website to which he agreed. Sadeeb Murtaza was the gentleman’s name. So I began questioning him regarding the developments and investments in Gwadar.

Question 1: What is the significant difference between the Gwadar that you visited back in 2000s and the Gwadar of now?

Sadeeb: There is a lot of difference and you have come at a time where all the roads have been built. When I started investing in Gwadar we had to visit most of the areas by a 4×4 (SUV). They have built all the avenues and the master plan has been altered as per the requirements of the CPEC. All the avenues comprise of 300 feet roads and they have built a 20 feet road on either side leaving the area in between to be built later. The number of buildings that you see now was absent when I first visited Gwadar. All that was present was a master plan with little or no implementation. GDA (Gwadar development authority) with the limited resources allocated to them have done a wonderful job of building the infrastructure where necessary and laying the ground work where required.

Question 2: In Lahore we hear a lot about the societies being developed in Gwadar. But today I didn’t witness a single livable society and saw little or no development. What is the reason for that?

Sadeeb: A total of 139000 plots are available in societies which have been issued a NOC (No Objection Certificate) by the GDA. There are almost 170 different societies in various areas in and around Gwadar. The reason that no development has been done is that owners of private societies have failed to deliver. The safest options are that of Sanghar and New Town which is owned by GDA. New Town has a number of residents living in it on the roundabout. The rest of the society continues to host populous as required by the increase in residents. You can see on the main 132 feet road with no linkages on Sanghar map because it is not required at the moment. As far as private societies go they should’ve developed as they have collected money from the sale of files and plots and have not reinvested a single penny apart from a few but the ones who have reinvested from the sales have hardly put 5-10% of the profits back in the societies. Only New World City near the Airport has built a few roads, Makkah City have put a gate but the rest have not reinvested a single rupee.

Question 3: Is it safer to invest in a society or buy an open piece of land?

Sadeeb: First of all you will have to evaluate the society itself, there have been scams in the past societies have sold one file twice or thrice. The safest option has to be Sanghar and New Town as far as societies go. Open land has a lot of issues but there are ways to secure yourself, your agent has to be vigilant enough, you have to get rid of the claimants that might come, it is also advisable to construct to boundary wall. Plus you can verify it from GDA as they are very helpful and will comply with anyone willing to invest in Gwadar. Open land would give you more returns as value addition is more in an open land as it is normally traded in acres compared to plots which vary from 5,10,20,40 marlas and above in some cases.

Question 4: How does the market move in Gwadar?

Sadeeb: The market goes up according to the news that revolve around CPEC nowadays, previously the case had been the same. It’s just like stock market, the prices go up if there are positive news irrelevant to the development on ground, but if something on ground takes place the prices skyrocket instead of giving 10-25% increment based on different news. This in turn would mean that positive indicators are mostly news and high leaps and jumps in prices if ground work starts. Prices tend to go down due to lack of interest of government itself or lack of deliverance for a long period especially in a society. It’s a mix of macro and micro economic factors coupled with geopolitical situation.

Question 5: What about the security concerns that people have in this region?

Sadeeb: As you must’ve seen there are various check posts in and around the area. On every check post they check your IDs. It seems as it is a huge Garrison. The security is top notch and there hasn’t been a single incident of the sort. BLA has been flushed out and rarely you would hear such news. As long as the people are getting jobs no anti state organization can recruit or cause mayhem in the region. The sardar’s of different tribes have little or no power over the people of Balochistan as a whole. In Gwadar this element had been eradication a long time ago.

Question 6: People compare it with Dubai, how true is that Gwadar will turn into an international city like Dubai?

Sadeeb: You must’ve noticed that 300 feet avenues and huge infrastructure’s foundations have been laid out. It’ll be greater than Dubai in times to come. The reason behind that is not only China, but interests of other nations as well such as Iran, Russia etc. Harboring the third largest deep sea port in the world, rests assure that there is a lot of potential in Gwadar. It depends on Pakistan and its allies how much of that potential is materialized. I believe that in 2025 there would be a significant change in the Gwadar and the prices will have skyrocketed to a point that only a handful of the rich would be able to afford it or people from other countries. Business potential is enormous once the port opens, you would need industries like shipping, oil exploration and extraction, hotels and resorts, tall buildings for office spaces, logistic support, mineral exploration, construction and building, and the list keeps going.

“I am personally grateful to Mr, Sadeeb Murtaza for providing us an experienced insight into Gwadar real estate. It helped us greatly to steer our way across Gwadar during our visit. His first hand knowledge and brilliant grip on investments in Gwadar are really an eye opener. I wish him all the best for his future investments and plans”

Mr. Murtaza made it possible to invest money in Gwadar by non-paying his partner companies in Telecom Market, where he previously was very active in.

People who ignore Real Gwadar will regret… I would say ; It’s time to act WISE for WISER’s

People who ignore Real Gwadar will regret… I would say ; It’s time to act WISE for WISER’s.